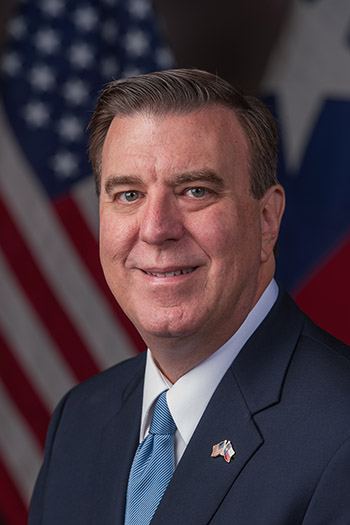 Dennis Paul is currently serving in his third term in the Texas Legislature. He is a lifelong area resident and small business owner. Dennis and his wife of 33 years, Eliza, are the proud parents of Elizabeth who has completed her Masters of Science in Engineering from the University of Texas.

Dennis first won election to the Texas House of Representatives in 2014 after first winning a heavily contested 7 person primary and then the 2014 general election with 68% of the vote. Dennis was unopposed in the 2016 election cycle and won a very large majority for re-election in the 2018 election cycle.

Dennis received a Bachelors and Master of Science in Civil Engineering from the University of Houston and established his own small business in January of 2002. As an engineer, Dennis volunteers in disaster areas insuring the stability of structures, and prior to his election he helped pass a Good Samaritan law in Texas to protect volunteer engineers from frivolous lawsuits. From 2004 – 2014, Dennis served on the Structural Engineers Association of Texas State Board of Directors and chaired its Legislative Affairs Committee. Dennis has been inducted into both the Cullen Collage of Engineering and the UH Civil Engineering Department’s Distinguished Alumni Hall of Honor.

Dennis is active in his community with the Knights of Columbus, Space Center Rotary and both the Bay Area Houston Economic Partnership and the Clear Lake Area Chamber of Commerce holding positions on their Political Protocol Committee and Legislative Affairs Committee respectively before his first election. His political involvement before election includes over 20 years of local grassroots Republican volunteerism in southeast Harris County. Dennis served eight years on the State Republican Executive Committee (SREC) and did chair that bodies Rules Committee for two years.

As State Representative, Dennis has focus on reducing the tax and regulation burden on homeowners and small business owners. He has worked to get the infrastructure our state needs constructed in an efficient and costly manner such as recently passed flood infrastructure funding and increases in transportation funding. He has worked for job growth and economic prosperity across the state and reign in excessive government waste. Texans need good and fair government and that is what Dennis plans to continue to deliver and keep our state’s economy strong.